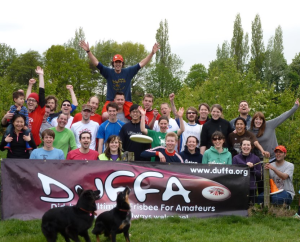 To celebrate our club hitting the grand old age of SIX(!) we will be having a mini hat tournament at Fog Lane Park, and then a barbecue with quaffing of fine ales and spirits later on!

We'll all then get clean (people who live outside Didsbury will be able to use our showers) and meet at Rich & Simon's house for a BBQ - bring your own meat and beer, we'll sort the BBQ (starting around 5.30pm)!

There will be the DUFFA AGM - we'll nominate and vote on a Committee for the next year. This is your chance to give a little something back to the club - we're looking for Committee members that can help the club along. All roles are available for nominations (Treasurer, Chair and Secretary included!), if you'd like to be involved please put yourself forward.

We'll be running our popular awards ceremony - voting details and categories to be announced before the day!

Bring some beer and meat (or veggie burgers)!